The MICCAI Grand Challenge on MR Brain Image Segmentation (MRBrainS13) workshop was held on September 26, 2013 in Nagoya, Japan. The challenge consisted of an off-site and on-site part. For the off-site part, teams could register on this website, download 5 training datasets (MRI scans + manual segmentations) and 12 test datasets (only MRI scans). In total 86 teams registered on the website, of which 58 teams signed the confidentiality agreement and downloaded the data. Twelve teams submitted the obtained results and a workshop paper with the description of their algorithm. Eleven teams presented their results at the MRBrainS13 workshop at the MICCAI and applied their algorithm to three additional datasets during the workshop (on-site part of the challenge). The results are presented below. 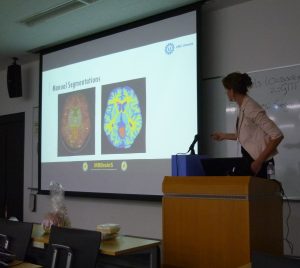 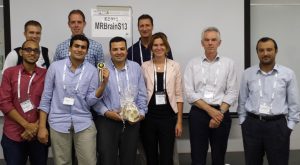 The first prize was awarded to team UofL BioImaging (BioImaging Laboratory, Bioengineering Department, University of Louisville, Louisville, KY, USA) for their method “MAP-Based Framework for Segmentation of MR Brain Images Based on Visual Appearance and Prior Shape” by A. Alansary, A. Soliman, F. Khalifa, A. Elnakib, M. Mostapha, M. Nitzken, M.F. Casanova, and A. El-Baz. 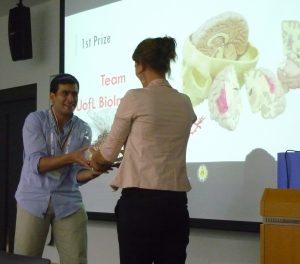 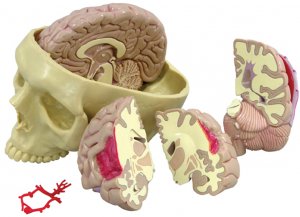 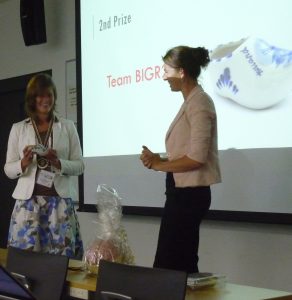 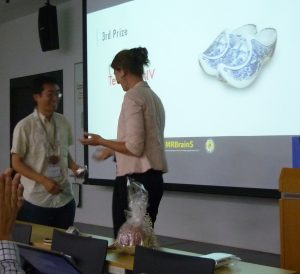 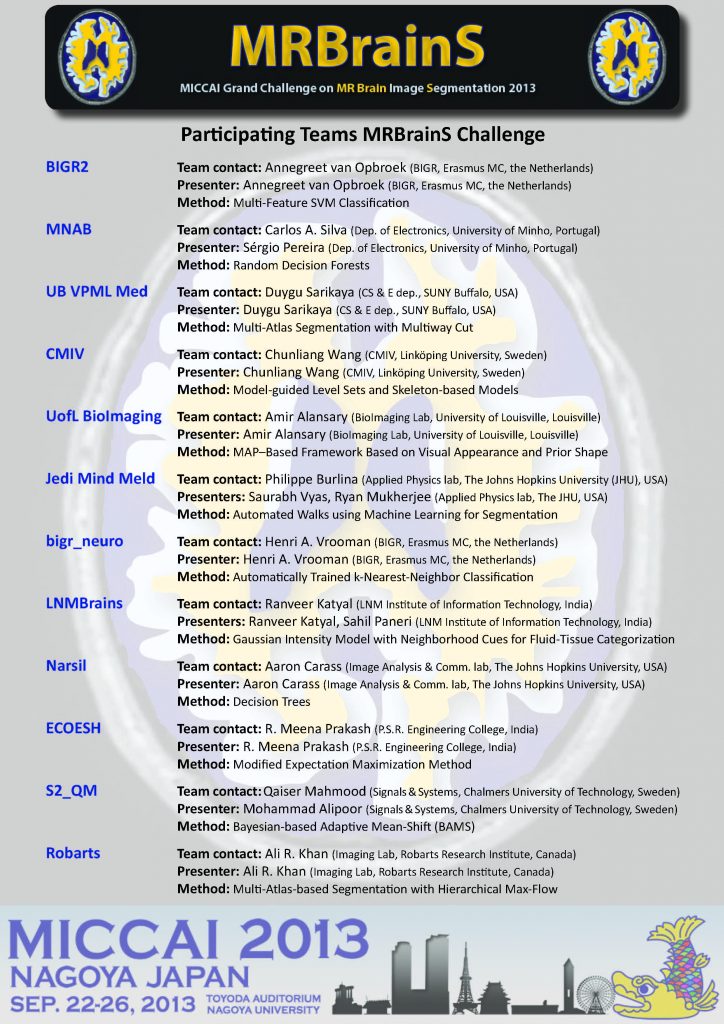 The final ranking was based on the evaluation results of all 15 test datasets (12 off-site and 3 on-site) and determined as follows: For each evaluation measure (Dice, Modified Hausdorff Distance and Abs. Volume Difference), the mean value over all 15 datasets was determined for white matter (WM), gray matter (GM) and cerebrospinal fluid (CSF). Each team received a rank (1=best, 11=worst) for each tissue type (GM, WM, CSF) and each evaluation measure (Dice, HD-95, AVD) based on the mean value of the evaluation measures over all 15 datasets. The final score was determined by adding the ranks of all tissue types and evaluation measures for each team. The team with the lowest score has won the MRBrainS13 challenge. In case two teams would have had an equal score, the team with the lowest standard deviation over the tissue types would have won the challenge. 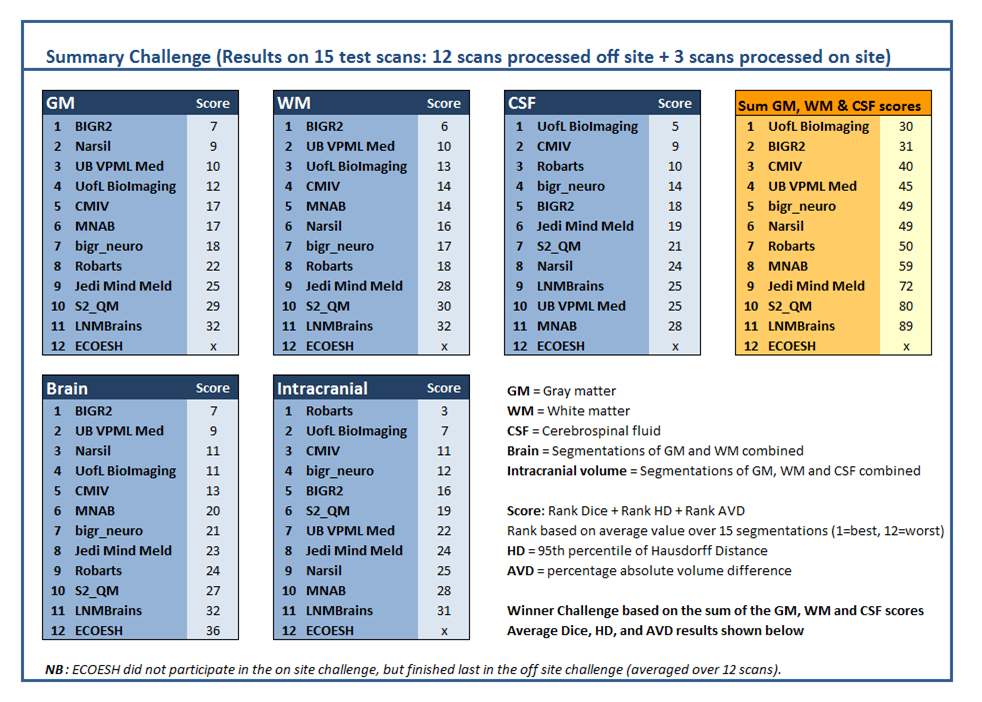 These graphs represent the mean and standard deviation of the results over all 15 scans per team per measure. 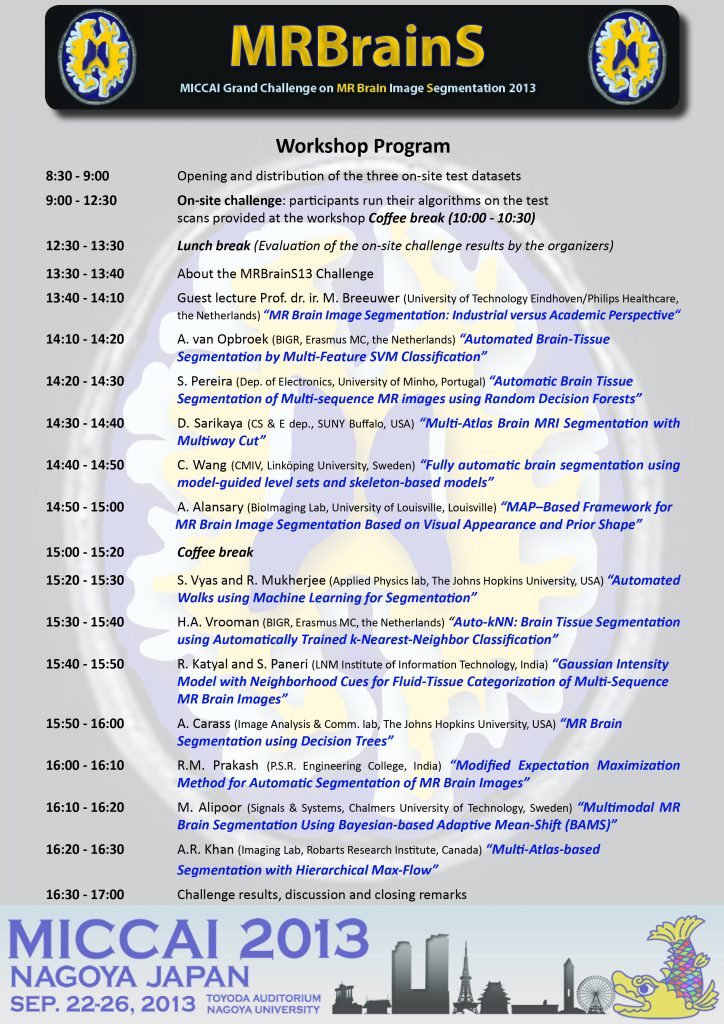